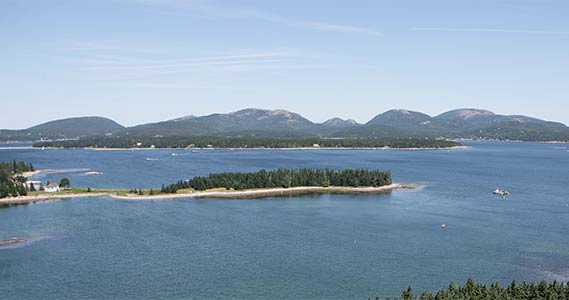 The Passamaquoddy people knew Mount Desert Island as Pemetic, meaning “range of mountains.” In 1604 (16 years before the Pilgrims landed in what is now Plymouth, Massachusetts), French explorer Samuel de Champlain dubbed it île des Monts Déserts, or "Island of the Bare Mountains," because of its treeless, granite mountaintops. The French and British struggled for ownership of MDI for 150 years, until finally the American Revolutionary War decided the matter; Mount Desert Island would become one of America's most cherished places.

By the mid-1800s, summer "rusticators" were flocking to Mount Desert Island, attracted by the breathtaking scenes depicted in the paintings of such famed landscape artists as Thomas Cole and Frederick Church. These hearty summer people were followed a decade later by many of America's most prominent families – the Rockefellers, Morgans, Fords, Vanderbilts, Carnegies, and Astors who built palatial "cottages" and forever transformed the Island by their presence.

Mount Desert Island is the largest island off the Maine Coast and the second largest on the eastern seaboard after Long Island, New York. Today, it is home to year-round communities, numerous summer colonies and, of course, Acadia National Park. While Bar Harbor is the largest town on the Island, smaller towns such as Northeast Harbor, Seal Harbor and Somesville, (part of the Town of Mount Desert), Southwest Harbor, and Tremont also have enticing amenities for year-round residents and summer visitors alike. Nearby offshore islands offer a variety of attractions, and towns on the mainland such as Blue Hill and Winter Harbor are also popular summer destinations.

Click on our links for more information about the towns and villages on Mount Desert Island, Acadia National Park, and the surrounding area, and to browse through a wealth of activities and resources.

Since 1898, our brokers and agents have been Maine's Finest Team - Professional Real Estate Brokers and Rental Agents.
read more...