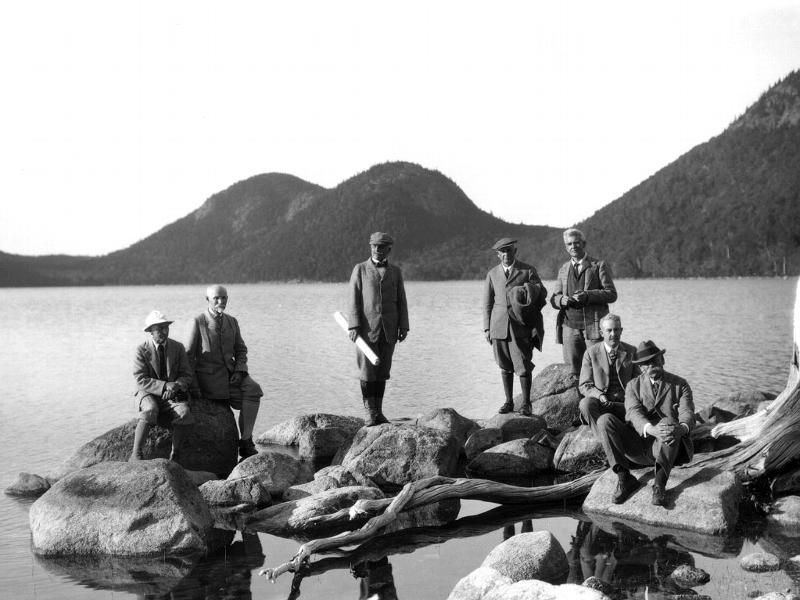 The park’s first superintendent was a fellow named George B. Dorr (far right in photo at left) who was responsible for leading the charge to make Acadia a nationally protected area. Dorr first came to Mount Desert Island in 1868 and grew to love it so intensely that he made it his home.

The remains of his homestead (right) can still be seen in the woods near Compass Harbor. I often go there just to sit on his old stone stairs and imagine what the island would have been like were it not for Dorr and his friends, including John D. Rockefeller, Jr., having had the foresight to preserve Acadia.


In honor of Acadia National Park’s 100th birthday a task force was convened to develop a year-long effort to help bring Acadia’s past into focus while encouraging continued stewardship. Acadia's Centennial has many activities and events throughout 2016. Plan your trip to Acadia soon! Check out various Centennial topics here.

Consider renting a house for your visit! The Knowles Company has summer vacation rentals to suit any needs and many are within walking or biking distance to Acadia.

Not sure where to stay on Mount Desert Island? Have a look at our Rentals Map. It shows Acadia in green and our rental properties in blue circles.

Since 1898, our brokers and agents have been Maine's Finest Team - Professional Real Estate Brokers and Rental Agents.
read more...